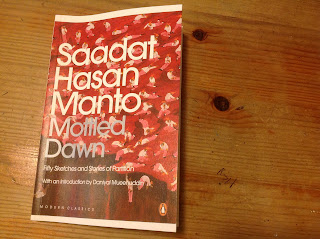 This is Saadat Hasan Manto's Mottled Dawn, Fifty Sketches and Stories of Partition, published by Penguin India. The cover is exquisite, it came the other day. The painting is 'Melting Wit' (2005, acrylic on canvas) by N. S. Harsha. I'm not sure if the clowns are bleeding or melting. Harsha says: 'I fill my work with gaps and loose ends; I want to lead and mislead the viewer. Ambiguity makes a picture very exciting'.

I've already read 'Toba Tek Singh' online - the first story in this anthology -  and have also read the introduction by Daniyal Mueenuddin, whose own short story 'A Spoiled Man' from In Other Rooms, Other Wonders is one of the saddest stories I've ever read. I look forward to the rest of Manto's  deceptively simple yet brutal and sometimes funny stories about Partition. It struck me that Manto was only seven years older than my Indian-born Pakistani father, who migrated to Karachi briefly in the late forties before coming to the west to work as a doctor. Manto migrated to Lahore from Bombay, but he was never happy there. Both of them died as not old men through alcohol excess.

These stories have been translated by Khalid Hasan and I was interested to read that Aatish Taseer - the estranged son of  the assassinated Pakistani politician (himself the nephew of poet Faiz Ahmed Faiz ) - does not approve of Hasan's translations, suggesting he lacks 'the simplicity, speed and vitality' of the original prose. He has translated Manto himself in an anthology of Selected Stories (Random House). I downloaded these last month and have read a couple. This reviewer is critical of Taseer's criticism of Hasan as a translator. As I only know a few words in Urdu - banana, water and thank you - I have to trust that whoever has translated has done a fine job.