Ten years since The State of Me - publishing & illness (&Lionel Shriver)

This August it will  be ten years since the The State of Me was published. I'm still very proud of the novel and it remains my weapon in the fight for truth about my illness. A decade has been enough time for me to get over the roller coaster of the publishing process - and I have happily mostly forgotten the shock of it all. It was like a never-ending game of snakes and ladders. As a result of the liquidation of my indie publisher, the novel did not receive the marketing it should have done - but I remain very grateful my precious work was not lost in the drama and that HarperCollins rescued the book. This review by writer Elizabeth Baines remains one of my favourite reviews.

The path to being published was though unbelievably stressful and possibly contributed to my later developing idiopathic bilateral uveitis, a rare and serious autoimmune eye condition, where your iris attacks itself. It was a truly awful time, pouring steroids into my eyes, with the side effects of increased eye pressure, which also had to be treated (I'm sure ME was implicated and I still get six-monthly checks at eye hospital). I still remember at the time a friend telling me not to read  José Saramago's Blindness, which I, of course, did read.

If I were well, I'd no doubt be on to my third, or even fourth novel, by now, but I live necessarily in the margins of the writing world. It is often said you are only as good as your last book, but I'm happy to say that my novel is still being read quietly in the background, giving people pleasure and educating about ME.

I was delighted recently that Nick Duerden, a journalist and writer who has made a good recovery from his own very disabling postviral illness, messaged me and said he found the book 'very powerful and gripping'. He also said: 'You write fear, confusion and anger very well indeed. It moved me'. Nick is author of the recent memoir Get Well Soon (Green Tree, 2018). In the same week, Scottish film director and screen writer May Miles Thomas sent me a lovely card saying how much she had enjoyed the novel. I'd sent May a copy as a thank you for having the opportunity to watch her brilliant and hypnotic film Voyageuse free online on Vimeo.  Voyageuse made me think a lot about the layers of storytelling and how we (re)construct a life. I highly recommend this film.

I have been asked by Lighthouse Books to speak about writing and disability at a one hour event with other ill/disabled writers (I identify as chronically ill rather than disabled, the social model of disability does not in my view serve people with ME particularly well). I have said yes though I never know how I will be on the day, but am flattered as it's a decade since The State of Me was published. I've been shortlisted for a couple of short fiction awards since then, and had short non/fiction published here and there - details in sidebar - but because I live with ME, every minute of every day, I am the polar opposite of prolific (my novella-in-progress in 2015 is still in progress).

I do, though, know about the writing process - The State of Me took probably eight or nine years to write/publish in all - and I do, of course, know intimately about chronic illness. Writing is harder when you are ill. Everything is harder when you are ill. But writing (even as slowly as I do) sustains me. I would love to publish another book in my lifetime, I may be sixty by the time that happens, and I am not joking when I say that. Approaching my mid-fifties, I find I am thinking more about life and death and what we do in  a lifetime. I'm also more acutely aware of just how much my illness has thieved from me. (Interesting to read this interview with Elizabeth Strout who didn't publish her first novel until she was forty-two (I was forty-four). She went on to win a Pulitzer.)

Lionel Shriver has been off on one of her wee rants again - this time she is bemoaning the fact that Penguin Random House has a diversity drive. She petulantly writes:


“Thus from now until 2025, literary excellence will be secondary to ticking all those ethnicity, gender, disability, sexual preference and crap-education boxes. We can safely infer from that email that if an agent submits a manuscript written by a gay transgender Caribbean who dropped out of school at seven and powers around town on a mobility scooter, it will be published, whether or not said manuscript is an incoherent, tedious, meandering and insensible pile of mixed-paper recycling. Good luck with that business model. Publishers may eschew standards, but readers will still have some."

How can she be so goddam myopic and insecure? Diversity can only ever be a force for good (as long as we are talking about actual meaningful representation and not just tokenism). Do we really want to be reading the same novels about the same characters by the same people over and over again? There is an excellent response to Lionel's nonsense here.

I can honestly though say I have never felt discriminated against in terms of ethnicity (in fact, mixed race writers are all the rage) or disability, though one agent unprofessionally left her job without telling me, I imagine she did not realise just how slowly I wrote. It was a huge shock to me, but somehow I picked myself up and kept writing, slowly, slowly. Self-belief and the importance of bearing witness to the catastrophe of my illness was what drove me. But like many debut writers, I just felt constantly thwarted by the gate-keeping mechanisms of publishing in general. To be constantly told how good your writing was but because of marketing/pigeonholing there was no 'fit' for your book was soul-crushing. I think though pigeonholing is less rigid now, fiction and memoir are more readily blurred. The idea of what constitutes a novel is much more fluid.

When my novel was eventually published ten years ago, it had nothing to do with representation of illness/disability -  the notion of diversity was not being trumpeted back then. My novel was published in spite of my illness rather than because of. It was published on its own merit, as novels should be. Also, I'm mixed race but The State of Me has nothing to do with race - I'm sure Lionel would be very confused: a mixed race author with a white main character whose illness/disability informs the whole novel. Also, my character does not use a mobility scooter, but I had my first try of one a few weeks ago at the Botanics in Edinburgh and it was bloody liberating.

Illness brings a walling off, there are simply aspects of being a writer that are impossible for me. I cannot embark upon the circuit of readings and  festivals that is required of writers these days. The performance part is, for many, a significant part of the writing life. I was lucky that (pre-liquidation) my indie publisher had no concerns about my being unable to do the running around and promoting. It does break my heart a little that I am walled off like this, but that is the case with many aspects of my life. Many years ago in late nineties, I was shortlisted for the Robert Louis Stevenson Award on the basis of a short story. The award is a month in France in Grez-sur-Loing where RLS spent much time. It looks blissful and restful and surely promotes one's creativity. I seduced myself into applying  as my undergraduate year in France in 1983 was cut short because of the onset of ME and I felt that RLS, himself ill his whole adult life, would have wanted me to go. But had I won I would have been unable to go as I learned later that you have to cycle through the forest to get your groceries.

Still, a decade ago I had my book launch in Waterstone's on George Street (it still had the comma then, though now closed down) - it was probably the happiest moment of my life. 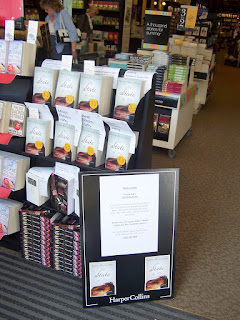