A woodpecker just when I needed one

I rest a lot in my bedroom. I read there too and also watch garden birds, I have a chair at the window. It is my meditation, my way of being peaceful, my way of 'working out'. It's restorative, I lose myself, nothing else matters. I have had a dreadful few weeks with one thing and another. Last night, I woke up around three with a brutal sinus headache, I am very prone to them and can no longer use steroidal sprays because of ocular hypertension (discovered in 2009 when using steroid drops for uveitis), so I swallowed a handful of Sudafed and Ibuprofen. It's the kind of pain that can make you cry. I had a scan many years ago and have chronic inflammation, possibly from an over-zealous use of mothballs. I declined surgery. Today, I woke early with the pain still on the fringes but bearable. A few hours later, I saw a woodpecker - an adult male great spotted - I've never seen one before. I had on my old glasses and saw a flash of red at feeder, wondered why goldfinches were eating peanuts and when I held up my camera - always in my bedside drawer -  I realised it was a woodpecker. I managed to nab it before it flitted off. It felt auspicious. Today is also the anniversary of my father's death, he died in 1972, and although for many years it was not a date I ever thought about,  since I've  been writing about him, the date has much more resonance. A friend sent me this, the symbolism of a woodpecker. 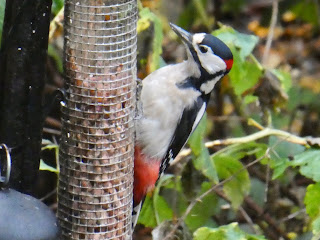